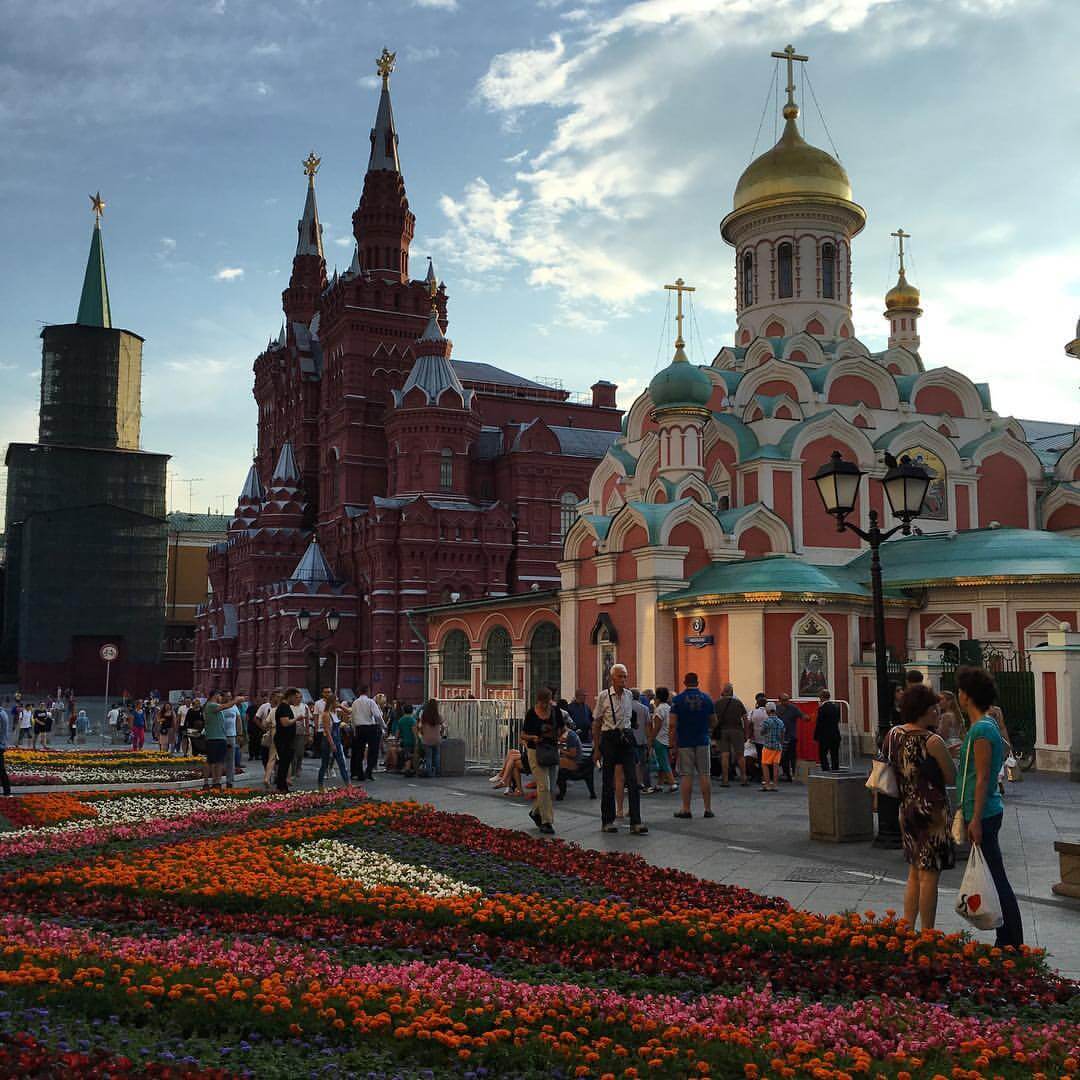 This is a tale of two very different cities: one the super-model of the empire, the other, the Grand Dame.

I have had a fascination for Russia (or the USSR as it was then) since I was a child: the stories of Tsars and Tsarinas, their Faberge obsession, the communist years, the cold war and the total removal of democracy. A visit in 1993 didn’t quell that fascination, in fact if anything, it heightened my interest and so it was only natural to return and discover even more about these very different cities over 20 years later – and whilst St Petersburg was a familiar beauty, Moscow had changed beyond belief!

As the two largest and most famous cities in Russia Moscow and St. Petersburg have a great deal in common. Both have served as the capital of Russia, both are significant cultural centres with numerous theatres, galleries and museums. Both are steeped in a fascinating and long, often violent history.

Travellers however, are interested in the differences between them and residents will happily attest to a fierce rivalry between the two. Moscow has a history that goes back a millennium, is famous for political struggles and intrigue, is dominated by the Kremlin and is emerging as a sleek, stylish city. St. Petersburg is just a few hundred years old, is synonymous with imperial splendour and elegance, and was built as a window to the Western world.

Last year I had the privilege to lead 12 fabulous women on our ‘To Russia with Love’ tour, a wonderful discovery of both of these cities and more. There is so much to do here, and I thought I would share some of the incredible experiences that took our breath away….

The city was nearly razed to the ground in 1812 as the Russians tried to fight off Napoleon’s advancing army. Today however, it is a modern metropolis, increasingly surrounded by concrete, glass and metal skyscrapers overlooking what remains of its illustrious history. Most of the twenty tallest buildings in the country are in Moscow and happily exist side-by-side with Stalin’s 7 sisters and the exquisite Red Square, housing the iconic St Basil’s Cathedral and the magnificent Kremlin.

Stepping into Red Square for the first time is quite simply awe-inspiring. The vast expanse of cobblestones, surrounded by the beauty of the Gum Department Store, St Basil’s and many architectural marvels, is an imposing sight. It evokes an incredible sense of awe to stroll across a place where so much of Russian history unfolded. Red Square represents Russia’s historical military prowess and is s symbol of the city’s political power. It has been the site of many military parades including the Victory Parade in 1945 celebrating the defeat of Nazi Germany. 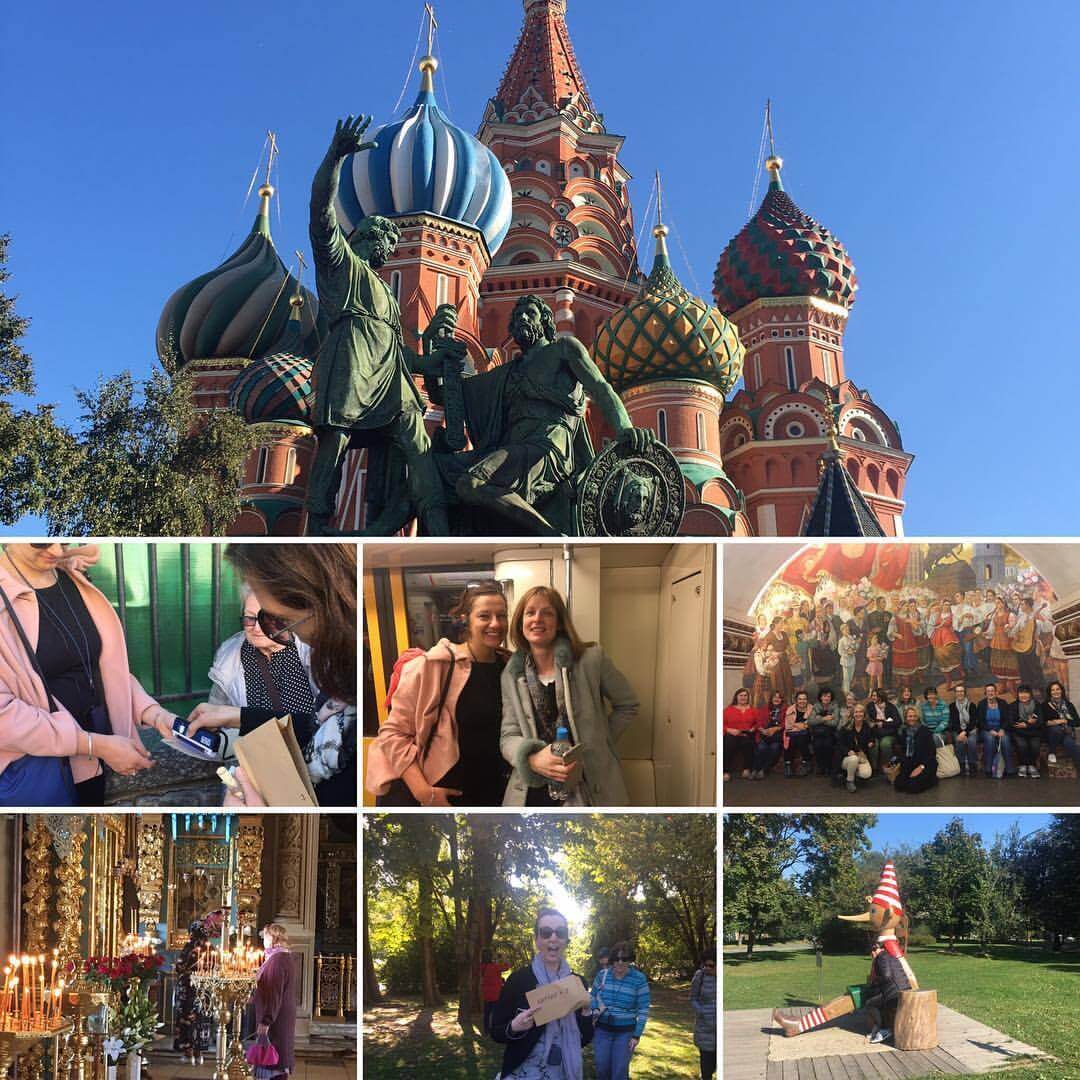 At the southern end of Red Square stands an icon of Russia: St Basil’s Cathedral commissioned by Ivan the Terrible. This extraordinary building resembles a gigantic, delicious dessert and is a confusion of crazy colours, patterns and shapes that culminate in a style that is unique to Russia and is incredible to explore…

A Travelling Divas’ Exclusive Experience: a private tour inside the Grand Kremlin Palace

The Moscow Kremlin is frequently referred to as the ‘Eighth Wonder of the World’. Located on the left bank of the Moskva River and considered one of the most beautiful architectural ensembles in the world. 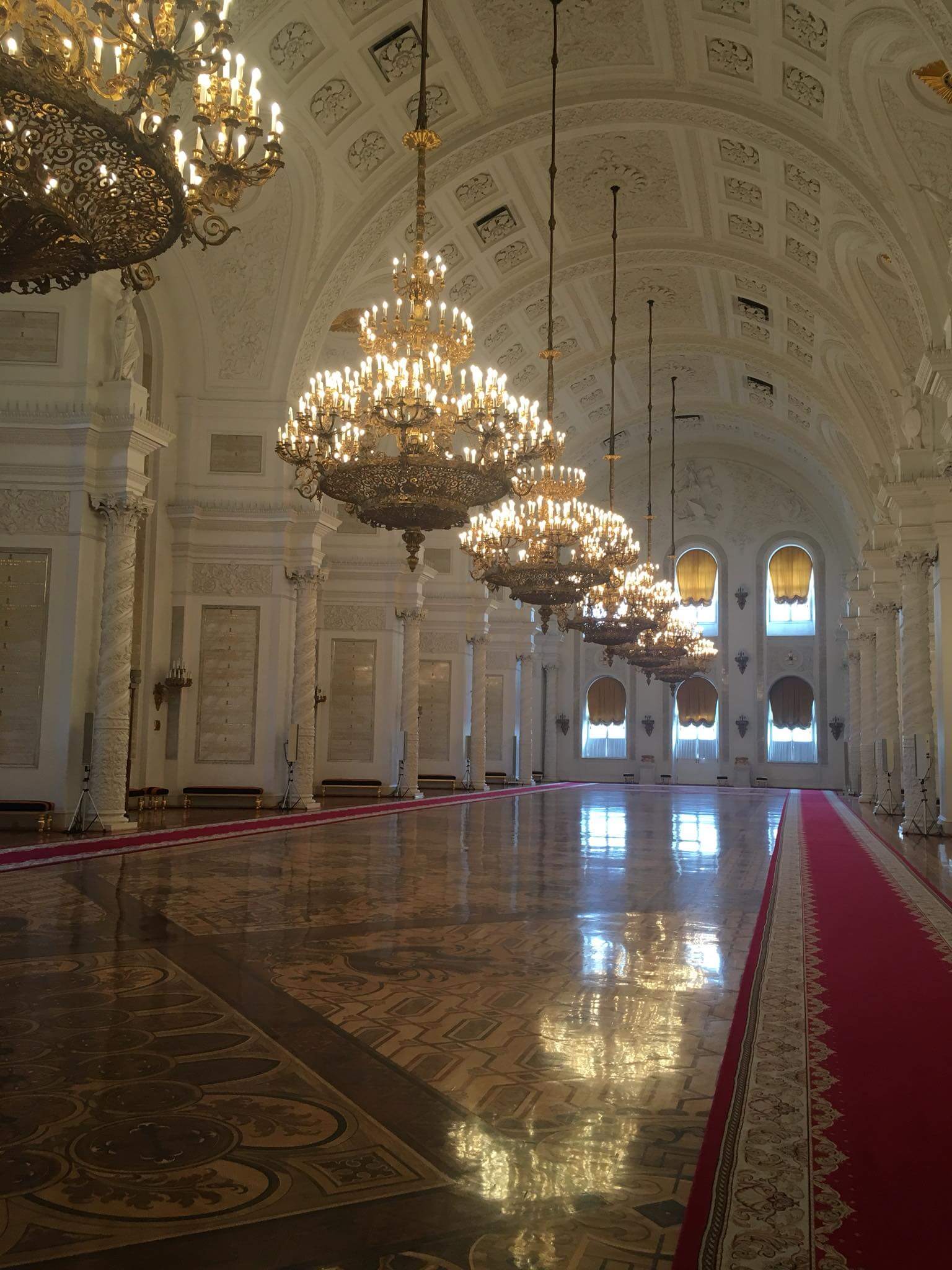 During our tour we were lucky enough to experience exclusive access to the Grand Kremlin Palace, something that can only be seen by a lucky few. This is the place where history is written, where Vladimir Putin makes an appearance post election, one of the residences of the Romanov Dynasty, where Royalty gathered and where the power and richness of the country is expressed. Truly a magnificent building that has been recently restored and is a once-in-a -ifetime moment.

Backstage at the Bolshoi

Experiencing the backstage tour of the world famous Bolshoi Theatre was a true privilege as we happened upon the lead ballerina practicing for the night’s performance and accessed its VIP areas…. 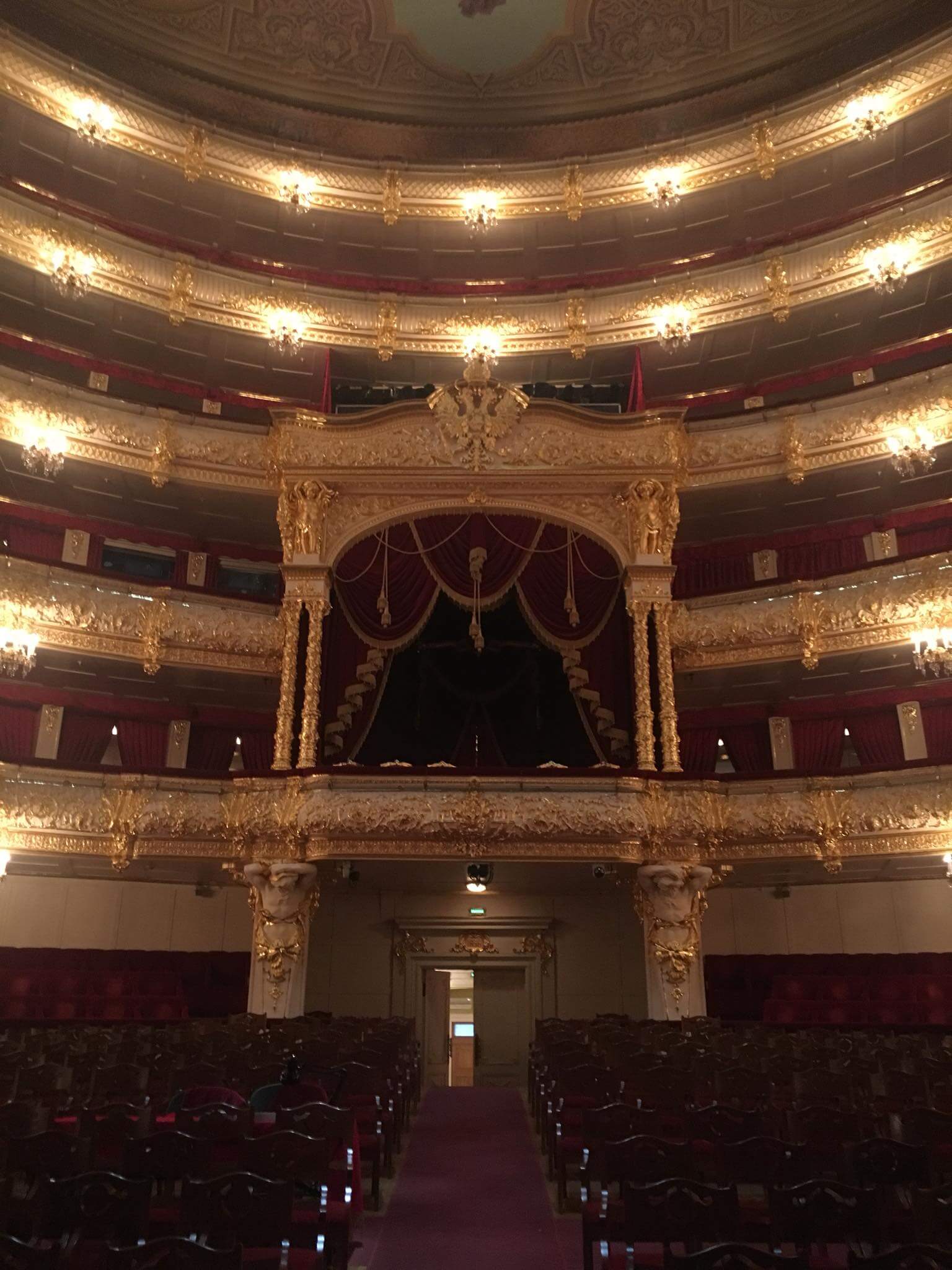 This magnificent theatre with its eight- columned portico was built in the middle of the 19th century, replacing the original which had burnt down in 1853. It is now considered to be one of the most technically advanced theatrical constructions in the world. Ballet and opera performances are staged regularly with participation of the world’s top performers, and the prima ballet performers of the Bolshoi no longer feel the need to defect when they travel overseas!

The last one on the list is the most beautiful underground in the world. It known as the largest underground museum and many of the stations were luxuriously designed and created by leading Soviet artists and sculptors, commissioned by Stalin to demonstrate the power and wealth of the Soviet Union. We were astonished by the sheer beauty of them, each illustrating its own style, story and mystery.

and now to St. Petersburg… 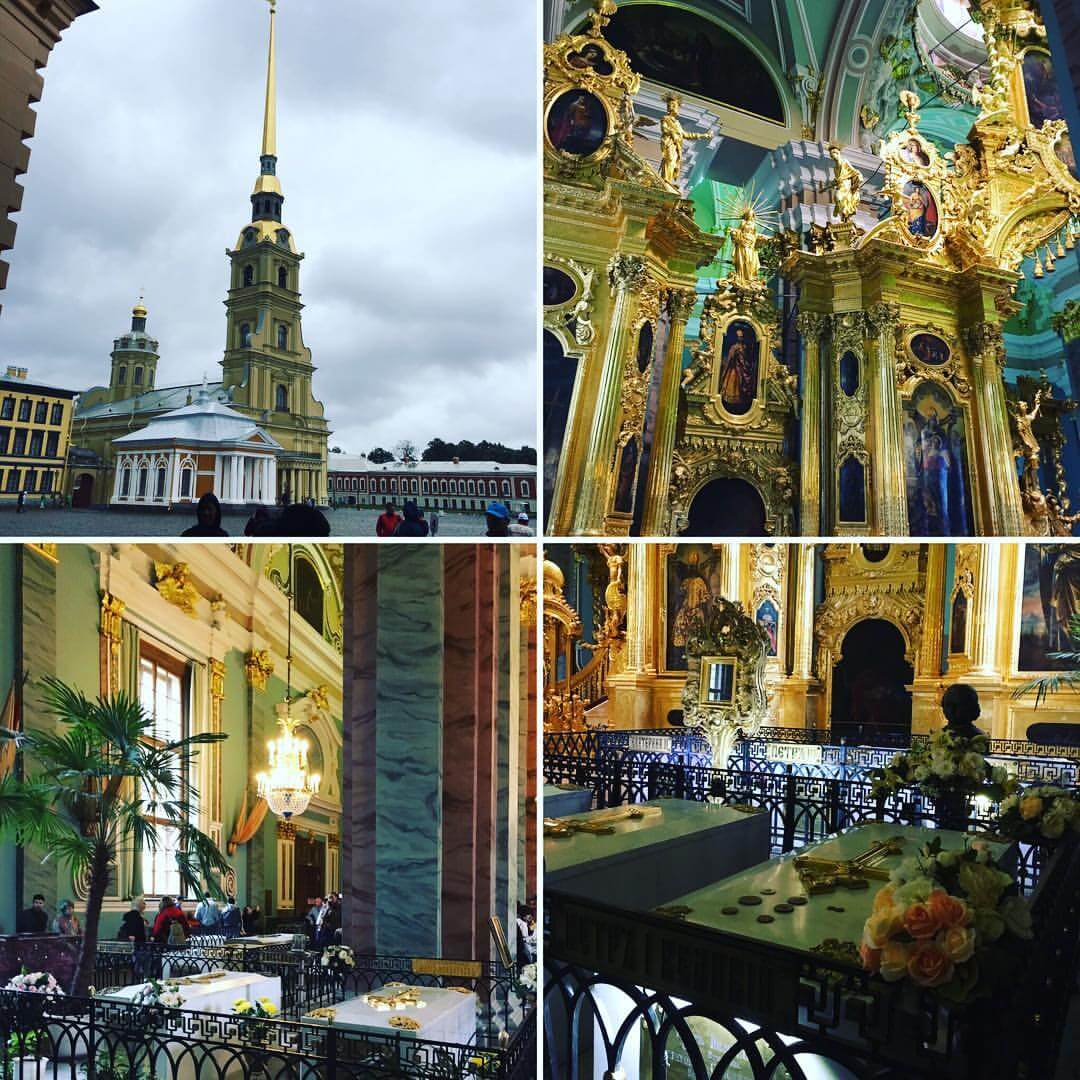 St. Petersburg is a beautiful city, often referred to as the Venice of the North due to the myriad of canals and bridges that connect the city. Walking through the city takes you back to a different time, as baroque and neoclassical buildings line the street, each with a tale to tell. The city’s imperial history can be felt everywhere, from the the Winter Palace which today houses the Hermitage Museum to the imperial estates that sit outside the city, such as Peterhof and Catherine the Great’s Palace. During the Golden years of Russia’s imperial history, St. Petersburg served as both the political and cultural capital and reminders of the great rulers, Peter I and Catherine II can be found throughout the city.

The entire centre of the city has been declared a UNESCO world heritage site and arriving into St. Petersburg after the frenetic pace of Moscow is like stepping into a different world. There is no obvious skyscrapers dominating the skyline and the pace is calmer, slower and half the population means a more laid back and less crowded experience – a perfect contrast to its super-model rival.

The Hermitage is an extraordinary building, set in the heart of St. Petersburg overlooking the River Neva. Originally built as a palace for the Royal Family it now houses one of the biggest art collections in the world, with over 3 million exhibits (plus what is in storage) displaying artefacts from Ancient Egypt through to early 20th Century Europe. 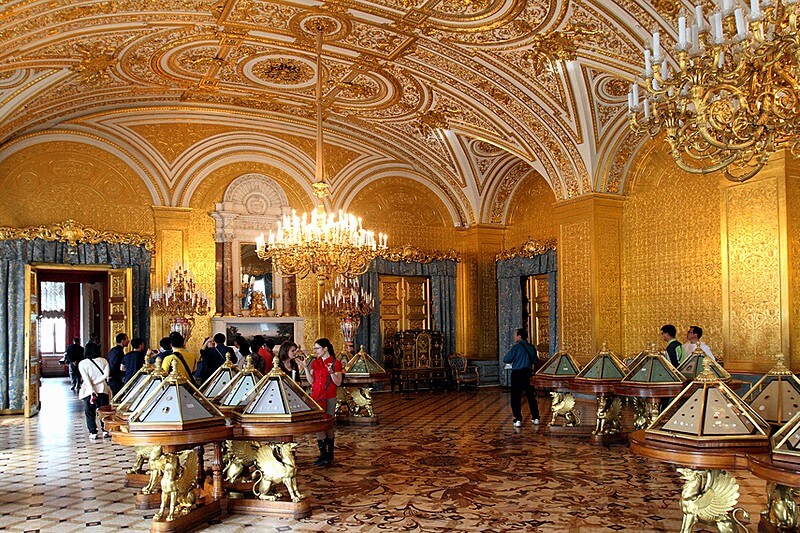 We spent a wonderful morning exploring this with our private guide (the best way to do it) checking out the incredible art, gala rooms and learning much of the history. It is then a delight to get lost in all of the places you haven’t seen. You could easily spend a week here and not see it all…

The jewel in the St. Petersburg Crown and a highlight of this Russian tour for many of the Divas, the silk-lined walls and glossy parquet floors of the Faberge Museum are the vision of Victor Vekselberg, a Russian billionaire who has been busy repatriating Russian decorative and fine art that was sold by the Soviet Government in the 1920’s and 1930’s. 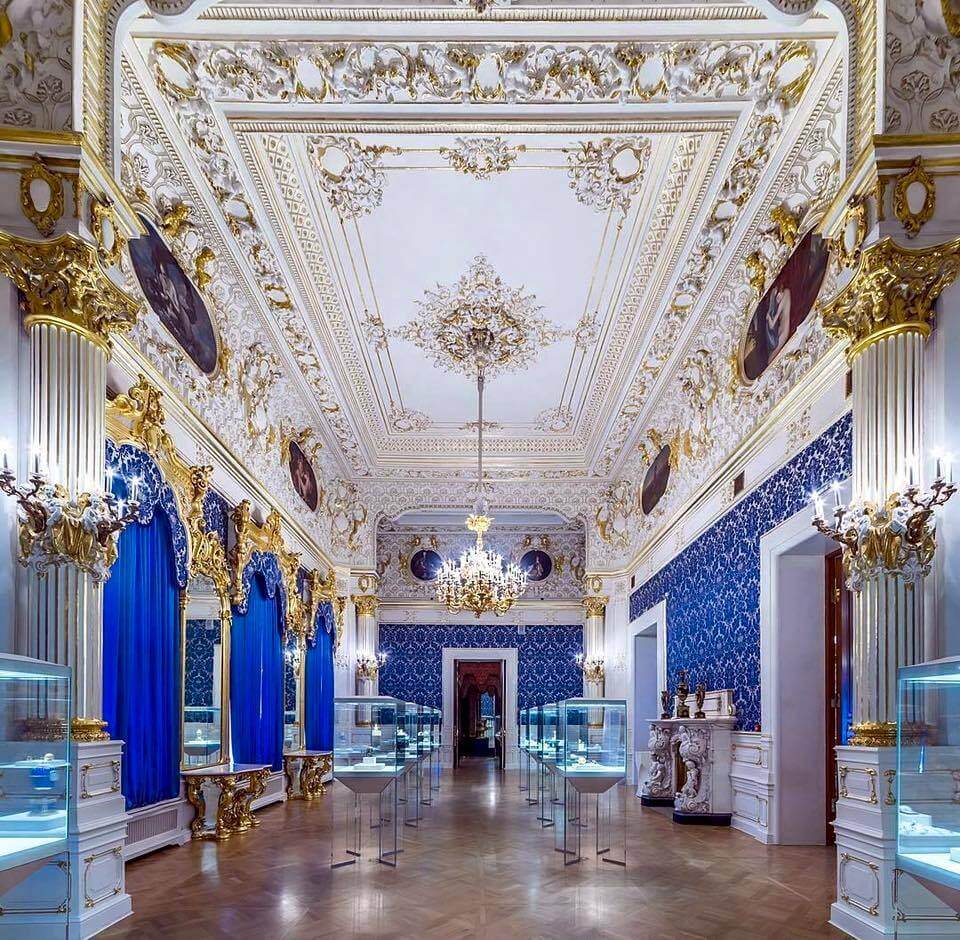 The beauty and sheer opulence of this palace is jaw-dropping and houses the largest collection of works by Carl Faberge, including nine of the exquisite Imperial Easter Eggs. It also houses decorative and applied works made by the Russian masters over several centuries, and the building itself is a living, breathing work of art. Make sure it is on your list.

There are so many palaces in St. Petersburg it is impossible to see them all, but we did see as many as we could!

On one fabulous day we visited two very different types of Royal Palaces – one that was used as a gala palace for official activities and one where royalty lived. 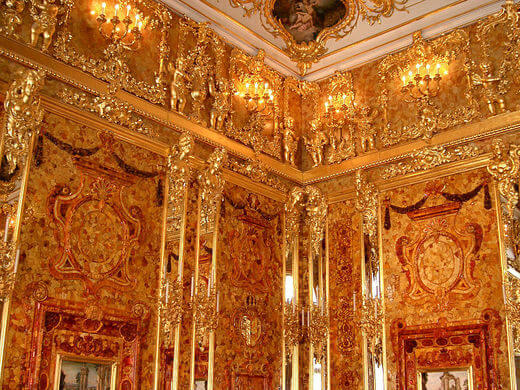 Firstly, we visited Pushkin where Catherine the Great’s Palace is located. This extraordinary building is an outstanding example of world architecture and landscape art. More than 100 kilograms of gold were used to to gild the sophisticated stucco facade and numerous statues were erected on the roof. Filled with 18th century paintings and ornate rooms, this white and gold palace is surrounded by a 1400 acre park complete with fountains, bridges and a beautiful pond. The palace also houses the famous Amber room now reconstructed, and the mystery of the original panels and where they are is still to be solved. It is a miracle of decorative art with mosaics of natural amber mounted on its walls, and the above photo cannot do it justice – this is a bucket list visit… It was then to Pavlovsk Palace or Paul’s Palace, which was created at the height of Russian Classicism and is now under UNESCO world heritage protection. This was the summer residence of the Emperor Paul, son of Catherine the Great, and has one of the largest landscaped gardens in Europe and Russia. We were lucky enough to explore these in a little horse and carriage through the glorious gardens, just as they would have done back in the days of the Emperor!

This is just a taste of what is on offer in this extraordinary country, and yes I use that word a lot because Russia in incredible. A visit to Russia isn’t really complete without experiencing both Moscow and St. Petersburg – together they reflect two different sides of this country, its people, its culture and history. It is visually stunning, brutal in its past and now bright in its future: right now it has everything to offer the curious traveller. Exciting times to visit as it hosts the 2018 World Cup and many other incredible events this year. 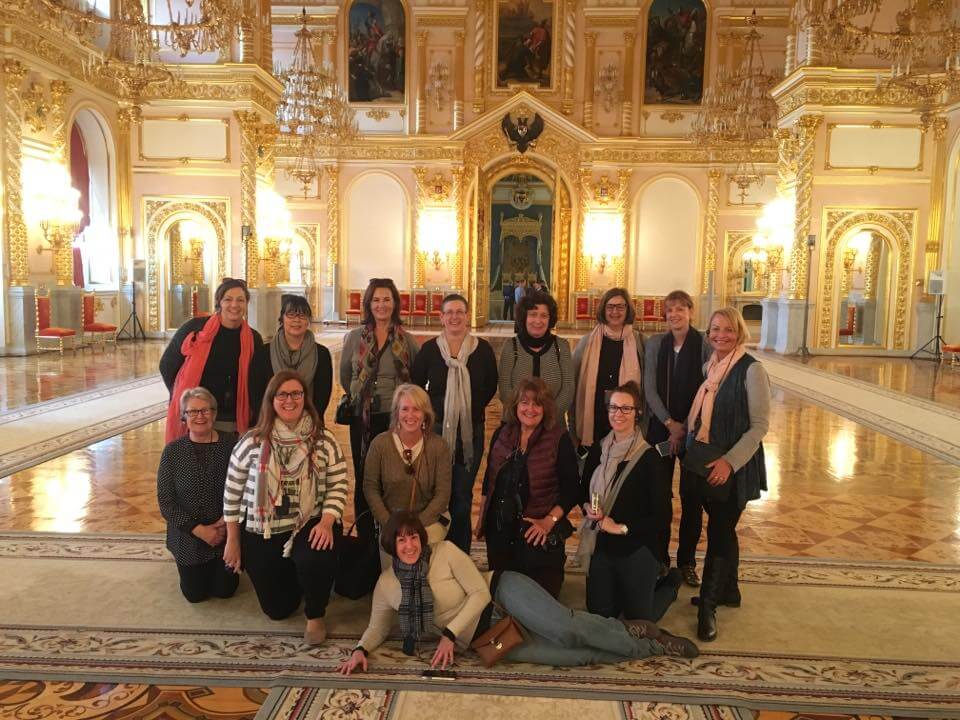 We had such a wonderful time travelling through Russia. If it sounds like you and you love luxury travel, exclusive experiences and the ability to explore with a group of like-minded passionate women, then ‘To Russia with Love’ in October 2018 might just be the tour for you! (that is us being a little cheeky in the Grand Kremlin Palace…).

Have a great week and chat soon.

One response to “A Tale of Two Cities: Moscow & St. Petersburg”